How to describe a person – 7 tips

Blog from NowNovel.com with appreciation. 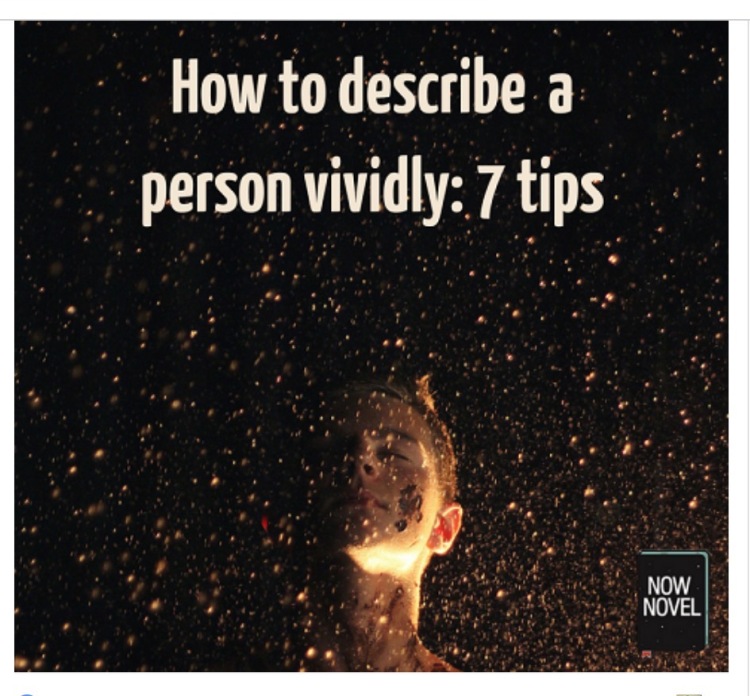 Learning how to describe a person so that the reader forms a vivid impression of your characters is essential for writing compelling stories. Read 7 tips for describing characters so they come to life:

1. Focus on details that reveal characters’ personalities and psychologies

5. Read writers renowned for their characterization

6. Create character sketches to inspire you as you write

7. Use exercises and prompts on how to describe a person to improve your craft

Let’s dive into each of these points:

1. Focus on details that reveal characters’ personalities and psychologies

A character’s hair or eye colour doesn’t tell the reader much. When you introduce a character, focus on details that reveal personality or psychology. Here’s Dostoevsky describing his character Katerina Ivanova (who has tuberculosis) in Crime and Punishment (1866):

‘Katerina Ivanovna had just begun, as she always did at every free moment, walking to and fro in her little room from window to stove and back again, with her arms folded across her chest, talking to herself and coughing.’

Dostoevsky conveys the fraught mental state of his character as well as her restless nature. The coughing is a reminder of her life-threatening condition. The fact she continues to pace despite her discomfort suggests her determination.

‘She thought carefully, every morning when she first took her seat, of the places where Rich was not. He was not in the smaller bathroom, where his shaving things still were, along with the prescription pills for various troublesome but not serious ailments which he’d refused to throw out.’

Munro creates emotional affect by describing details (Rich’s shaving tools that remain in his absence) to create an impression of the now-absent character.

‘He was of course not out on the half-scraped deck, ready to peer jokingly in the window – through which she might, in earlier days, have pretended to be alarmed at the sight of a peeping tom.’

The details Munro introduces combine character behaviour (Rich’s joking at the window) and setting detail (‘the half-scraped deck’) to simultaneously create a sense of character and place. These details are effective as they show Nita’s process of remembering the mundane as well as touching and characterful elements of her late husband.

A large part of learning how to describe a person convincingly is showing what makes them unique or distinctive. The Victorian author Charles Dickens, a master of characterization, did this expertly. Here Dickens describes the schoolmaster Thomas Gradgrind, ‘a man of facts and calculations’ in his novel Hard Times (1854):

Although Dickens describes his character’s hair, he uses a striking visual metaphor (‘a plantation of firs’). This leads quickly back to description showing the schoolmaster’s fact-obssessed nature (‘…as if the head had scarcely warehouse-room for the hard facts stored inside’).

Dickens takes the description of Gradgrind as obstinate and fact-obsessed further:

‘The speaker’s obstinate carriage, square coat, square legs, square shoulders, – nay, his very neckcloth, trained to take him by the throat with an unaccommodating grasp, like a stubborn fact, as it was, – all helped the emphasis.’

Thus a single, defining detail – Gradgrind’s bullish nature (signalled by his ‘dry’ and ‘dictatorial’ mouth) becomes the basis for most of the description.

If Dickens had simply said ‘he was balding and inflexible and would lecture the students about facts’, this would create some sense of character. Yet the unique details Dickens brings in make Thomas Gradgrind especially vivid.

Showing characters’ gestures and actions is an important part of bringing characters to life. A character’s movement, body language and gestures can describe a lot about their personality and psychological state.

In the example from Dostoevsky above, Katerina Ivanovna’s anxious pacing conveys her mounting fear over her husband (who drinks away the little money they have). In Hard Times, Dickens uses movement and body language to reinforce the impression of Gradgrind as domineering and forceful:

‘Girl number twenty,’ said Mr. Gradgrind, squarely pointing with his square forefinger, ‘I don’t know that girl. Who is that girl?’

Dickens’ extends Gradgrind’s ‘squareness’ through his pointing. The pupil’s responding behaviour and gestures show the schoolmaster’s dominance. The girl’s own body language conveys both her own bashfulness and the fact that Gradgrind wields stern authority over his pupils.

Dickens could simply use dialogue for the schoolmaster’s inquiry. Because of Gradgrind’s gestures, though, we get a clearsense of his dominant, demanding persona.

How to describe a personInternal contradictions make many characters fascinating, because they show human complexity. The tough talker has a soft side they reveal to a select few. The anxious worrier reveals surprising strength at a pivotal moment.

In A.A. Milne’s beloved children’s classic, Winnie-the-Pooh, the character Piglet is full of fear yet he accompanies his friend on a daring mission to spy a ‘Heffalump’ (a fearful monster of their own imagining).

Similarly, in Tolkien’s Lord of the Rings cycle, it is Frodo’s simple and faithful friend Samwise who accompanies him into the villain’s heartland, long after characters who seemed more fitting for the task have departed.

When describing characters, think about the small contradictions and inconsistencies people often contain. As a result you will avoid creating ‘stock’ character types, for example, the brave warrior who is invulnerable and unstoppable. Give every Achilles his vulnerable heel.

5. Read writers renowned for their characterization

To learn how to describe a person brilliantly, collect strong character descriptions. Read authors who are particularly noted for their characters. Russian authors such as Anton Chekhov (along with the likes of Dickens) are good examples.

Here, for example, is Chekhov describing his character Mihail Petrovitch Zotov, an old man, in his story ‘The Dependents’:

‘Mihail Petrovitch Zotov, a decrepit and solitary old man of seventy, belonging to the artisan class, was awakened by the cold and the aching in his old limbs […] Zotov cleared his throat, coughed, and shrinking from the cold, got out of bed. In accordance with years of habit, he stood for a long time before the ikon, saying his prayers […]. To whom those names belonged he had forgotten years ago, and he only repeated them from habit.’

Chekhov conveys the age of his character well via his aching with the cold as well as his patchy memory. Chekhov deepens his character description by sharing Zotov’s thoughts in a later paragraph:

‘ “What an existence!” he grumbled, rolling crumbs of black bread round in his mouth. “It’s a dog’s life. No tea! And it isn’t as though I were a simple peasant: I’m an artisan and a house-owner. The disgrace!” ‘

Chekhov combines this portrait of the character’s psychological state with description of his appearance:

‘Grumbling and talking to himself, Zotov put on his overcoat, which was like a crinoline, and, thrusting his feet into huge clumsy golosh-boots (made in the year 1867 by a bootmaker called Prohoritch), went out into the
Start keeping a journal where you collect character descriptions that strike you as effective.

Categorise and create sections such as ‘description – clothing’ or ‘description – faces’. This can become a useful source of inspiration to page through when you are sketching out your own characters.

6. Create character sketches to inspire you as you write

It’s easier to describe characters comprehensively when you have character sketches to crib from. The ‘character’ section of Now Novel’s idea finder helps you flesh out characters in greater detail so that you have a blueprint for each actor in your story. Whether or not you use this tool, create a sketch for each character.

Biography (where were they born? What is their occupation? What were the most formative experiences in their life?)
Interests

These are only some of the details you can work out to draft with a fuller portrait of each character in your mind’s eye.

7. Use exercises and prompts on how to describe a person to improve your craft

If there is an area of craft you struggle with – such as how to describe a person so they come alive – use exercises and prompts. Practicing each element of physical description along with using movement and gesture will help you give characters authentic-feeling depth.

Here are some exercises to get going with character description:

Describe a woman’s face in a moment of anger. Use at least one metaphor (‘Her mouth is a…’)

A woman finds out she has won the lottery. Describe her emotions using body language and movement as she moves from elation to anxiety and back again.

A man has found out his friend has committed a great deception. Describe him approaching from the friend’s viewpoint. Show the friend realising he’s been found out.

Create your own exercises around scenarios from your actual story. This is a useful way to focus on showing the underlying emotion or drama of a scene effectively.