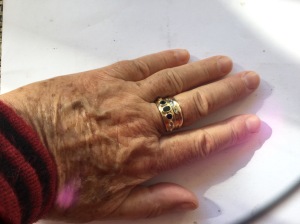 What does this photo tell you about this hand? Have you noticed the information a hand can pass on?

Not just the weak handshake person, or the finger cruncher . . ., I mean how the hand looks.

Thanks again to NowNovel for this informative blog.

Many amateur writers stop at describing eye colour or how characters say their dialogue. Yet there are many different physical details you can use to show a character’s nature. Read examples that show how to describe hands in such a way that your writing is rich and detailed: 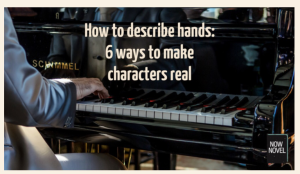 1. Learn how to describe hands to show characters’ background.

One purpose for describing hands is to tell readers about a characters’ background or vocation. If your protagonist is a chef in a fast-paced restaurant, for example, they might have a battle scar or two – a burn from a hot grill. Background you can draw attention to using hand description includes:

Work history (a manual labourer, for example, may have calloused hands from hard work)

Traumatic past events (for example, a character has a scar on his forefinger because his younger brother attacked him with a box-cutter in a major argument when they were kids)

Consider this example of hand description from John Steinbeck’s The Grapes of Wrath (1939), showing the protagonist’s background as a low-income farm worker:

‘His hands were hard, with broad fingers and nails as thick and ridged as little clam shells. The space between thumb and forefinger and the hams of his hands were shiny with callus.’
Steinbeck’s description makes it clear his character is accustomed to hard, physically-exacting work. This descriptive detail sets the tone for his character’s grueling journey.

2. Use words to describe hands that reveal personality

Like describing a character’s face (from ‘sallow’ to ‘gaunt’ to ‘youthful’), there are many words to describe hands that can help to flesh out your characters’ personalities.

For example, you could say:

‘He had impossibly enormous hands – his over-enthusiastic handshakes could definitely snap your wrist in two if you had weak bones.’

The size of the character’s hands conveys his strength. The hypothetical handshake goes further, implying the character is also an outgoing, enthusiastic person.

Think of other personalities, as an exercise, and try to describe hands to match each type. For example, characters who are:

Movement and gesture makes characters animated, giving them life on the page. Describing hand signals and gestures is a useful way to show characters’ moods and intentions, or to amplify what they communicate to each other.

A sarcastic and negative teenage character, for example, might sometimes air quote for irony. Example:

“Don’t go in there. Mom’s having her ‘me time’,” Jen wiggled two-finger peace signs into air quotes. “Ever since she got back from that yoga retreat she thinks she’s Gandhi or something.”

Other hand gestures include:

Signs of aggression and conflict (showing the middle finger, drawing the finger across the throat)

Gestures that show personality (for example, a character who clicks their fingers whenever they say something sassy)

Hand gestures that are a character’s unique quirks (e.g. a character drums the tips of their fingers together in Mr-Burns-from-The-Simpsons-like rapture whenever they talk about food they love)

The important thing with describing hands is not to overdo it. When you introduce a character, a hand gesture could add punch. But like every device, if you use this element on every page it will start to irritate and lose its effect.

Describing hands is something the great authors do well. Like in John Steinbeck’s example above, good description adds authenticating detail, making characters feel like flesh and blood.

Here, in Fahrenheit 451 (1953), Ray Bradbury describes the art of doing things by hand as something that imbues actions with spirit and enduring significance:

‘Everyone must leave something behind when he dies, my grandfather said. A child or a book or a painting or a house or a wall built or a pair of shoes made. Or a garden planted. Something your hand touched some way so your soul has somewhere to go when you die, and when people look at that tree or that flower you planted, you’re there.’

This captures something of the intimacy of hands (and the intimacy between grandfather and grandson), as does this quote by Barbara Kingsolver:
‘The friend who holds your hand and says the wrong thing is made of dearer stuff than the one who stays away.’
Think of the truth in this. Say, for example, you write a scene where one character tells another something that is painful to hear but important. For example, that the other is on a self-destructive path and alienating their closest friends. Having the truth-telling character reach out and take the other’s hand, or place a hand on their shoulder, creates intimacy and a sense of trust. It shows your character’s attempt to soften hard but necessary words.
Describing hands in metaphorical terms is also an effective way to show your characters’ feelings, hopes and failures. For example, read F. Scott Fitzgerald’s metaphor involving hands. Here, in The Beautiful and the Damned (1922), the protagonist Anthony Patch tells Dot, the woman he is having an extra-marital affair with, his feelings:
‘Things are sweeter when they’re lost. I know–because once I wanted something and got it. It was the only thing I ever wanted badly, Dot, and when I got it it turned to dust in my hand.’

Because Anthony is heir to his grandfather’s fortune, he is stifled by his own sense of impending wealth, becoming stuck in insubstantial pursuits (partying and drinking) and he struggles to find a vocation. Thus the metaphor of everything turning to dust in Anthony’s hands effectively shows the character’s inability to grasp a meaningful life, his inability to shape and control his own fortunes for the time being.

People’s hands also reveal their age. An older character might have wrinkled hands, scattered with lines and sun spots, while younger hands could be plumper, softer.

Of course, characters’ hands can also be incongruous with their biological age. For example, a young person who’s had a life of hard manual labour could be described thus:

‘Her hands were those of a much older woman, jabbed and poked as they were by needles in the dim light of the workshop where she tailored the clothing of investment bankers and opera-goers, often through the night until the morning risers wheeled their rattling bins onto the street.’
Are your characters’ hands fitting for their age, or do they show something telling in their contrast?

For example, an older, more privileged person might have younger hands due to having done little labour (or because they have an expensive beauty regimen). Think about what details such as these tell the reader about your characters. 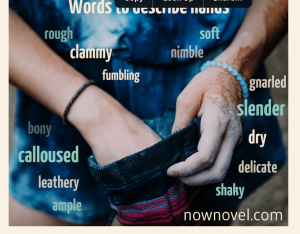 6. Use characters’ hands to show their emotional states

The physical appearance and movements of characters’ hands reveal plenty about their emotional state. Beware clichéd hand gestures, however. For example, hand-wringing to show anxiety or distress. How many people do you know who actually wring their hands when distraught?

This may be a tic people do exhibit, but try choose descriptions that aren’t stock phrases (‘she wrung her hands in dismay’). If you do use a similar gesture, think about how you can estrange it from the cliché and make it fresh again, by adding your own detail. For example:

‘She pinched her index finger, all the way to the tip and back down again, as though she was checking and double-checking for a kink or break, while she listened, brow creased, to the unsettling news.’

Other ways describing hands can show your character’s emotional state include:

Cracking knuckles – this tic can indicate either being absent-mindedly deep in thought or simmering, suppressed aggression

Drumming fingers on a surface – this could indicate impatience, restlessness or boredom

Including descriptions of what your characters do with their hands will add extra colour and specificity to your description. Remember to balance this type of description with others, so that your characters aren’t all hands. The key to good style is balancing the elements of writing – action, narration, description and more – so that nothing begins to read as the author’s pet technique or crutch.

Ready to improve your characters? Join Now Novel and get helpful feedback on character description or brainstorm details for your characters using our helpful prompts and guides.