Am I still popping in adverbs when stronger, clearer descriptive methods describe better? Enough of lazy writing! This reminder from NowNovel hits the mark. I hope it does for you as well.

By the way, chapter Thirty-Seven of my novel re-write has  challenged me. Spent a full day on it yesterday. Today I’ll have it Sussed! And work on the final chapter.

Hopefully the editor will have the full manuscript  back in her hands in the coming weeks.  Will keep you posted. Glennis 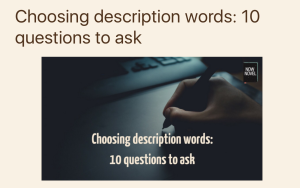 There are endless ways to describe someone, from physical description to verbal tics, personal views and more. Here are 10 questions to ask about your description words to help you make your writing vivid:

1: What are the most precise, descriptive nouns?

Nouns themselves have degrees of descriptiveness. Compare, for example, the words ‘child’ and ‘brat’. A narrator who constantly refers to his next-door neighbours’ child as ‘the brat’ will come across a particular way. Their persona will seem very different to one who simply refers to ‘the child’. The former may seem angry or crotchety, a person who doesn’t enjoy the company of children. This could also tell us about the child’s behaviour (perhaps they continuously play cruel pranks). The more descriptive noun could thus describe both the neighbour’s attitude regarding the child and the child’s behaviour.

When you read over the nouns you’ve used in a scene, ask yourself:

Is this the most precise noun? E.g. ‘hat’ vs ‘fedora’; a stranger’s ‘stare’ vs ‘leer’
Is there a similar word that could be more revealing of my narrator’s personality? (For example, an eccentric violinist who hates the sound of the piano might call it the ‘boring rattle-box’)

2: Have I chosen the most descriptive adjectives?

The definition of an adjective is ‘a word naming an attribute of a noun, such as sweet, red, or technical.’ (OED). There are many synonyms for adjectives. Take the three examples the Oxford Dictionary uses, to illustrate:

Sometimes a different adjective is useful because it shades your description with extra intensity. When we read ‘The king ascended to the dais slowly, his red robes scarcely stirring,’ we see the overall motion. Yet replace ‘red’ with ‘crimson’ and we see a more specific shade.

Specific and precise adjectives add variety. The important thing is not to go overboard. You don’t have to describe every shade of red known to man to make a coronation colourful, for example. But a little variety and specificity will add panache to your descriptions.

3: Are my description words building cohesive tone and mood?

When you choose describing words, decide what mood you want to create. An excellent author to read for descriptive mood and tone is J.R.R. Tolkien. The contrasts between the peaceful Shire, the land of the hobbits, and the Elves’ forest homeland, Lothlórien, makes both places distinct.

‘There are no trees like the trees of that land. For in the autumn their leaves fall not, but turn to gold. Not till the spring and the new green opens do they fall, and then the boughs are laden with yellow flowers; and the floor of the wood is golden, and golden is the roof, and its pillars are of silver, for the bark of the trees is smooth and grey.’

There is a consistent tone of wonder and calm in Legolas’ description, from the ‘golden’ qualities of the forest to words that suggest strength (‘pillars’), abundance (‘laden’) and order (‘smooth’).

4: Is there extra meaning in your describing words’ etymologies?

Etymology (the origins of words) is worth dipping into when writing description. Sometimes a word in English has distant Latin, Greek or Germanic roots that add an extra subtle shadow of meaning.
Compare, for example, the etymologies of the words ‘steal’ and ‘swipe’. The former comes from Proto-Germanic languages, meaning ‘to commit a theft, to take and carry off clandestinely and without right or leave.’

The word ‘swipe’, on the other hand, means ‘to strike with a sweeping motion’. It became a synonym for stealing supposedly around 1885, as prison jargon. ‘Swipe’ contains connotations of sudden movement from the word’s original meaning. Thus there is more of a sense of opportunistic, sudden, illicit seizure, rather than stealth.

When you want a synonym for a word in your description you feel is bland, explore origins via an online etymology dictionary. See if there are lucky secondary meanings that fit your scene and make your description even stronger.

5: Have I balanced description with action, dialogue and narration?

One thing to avoid is description that reads as a laundry list of items. For example:

Although this isn’t the worst description ever, describing characters’ features in context draws attention to the author’s steering presence less. Doing so allows your reader to immerse themselves in your world more.

So how do you balance your description words with action and narration?

Tie description to actions. For example: ‘When she finally took off her sunglasses I saw her eyes were a striking blue’

Mention physical description where relevant or necessary to the story. For example a friend of the above character might be considering cosmetic surgery. The character says, ‘I’ve always thought my chin’s too weak.’ This is stronger than simply narrating the character’s appearance because we see the character through her own eyes. She has interiority and vulnerability

Sign up to Now Novel and improve your descriptions

6: Are my descriptions clichéd?

Because clichés are overused, we notice them more because they are unimaginative than because of the detail they attempt to show.

Take, for example, a romantic hero described as ‘dark and brooding’. We can substitute him for a Heathcliff or a Mr Darcy without really seeing what makes this character unique. Think of other ways to show these attributes:

The initially dark and brooding Mr Darcy, for example, lingers on the outskirts of the dance at a ball in Jane Austen’s Pride and Prejudice. The author consistenly creates a portrait of an aloof, serious person

Similarly, Heathcliff’s callous and gruff behaviour toward’s the co-inhabitants of his cottage on the moor in Emily Bronte’s Wuthering Heights reveals his dark and forceful nature through action rather than by saying ‘he was dark and forceful’

7: Can I condense my description and achieve equal effect?

Truly effective descriptions are often powerful because of how concise they are. They say a lot with little means. The more abstract words you use (e.g. ‘He was strong and courageous’), the less precise our image of a character becomes.

Consider this example by Barbara Kingsolver from The Poisonwood Bible, where the character Orleanna Price describes a forest in the Congo:

‘Every space is filled with life: delicate, poisonous frogs war-painted like skeletons, clutched in copulation, secreting their precious eggs onto dripping leaves.’

Kingsolver starts with the general, describing the abundance of wildlife in simple terms. From here she moves to particulars, focusing on just one creature: the frog. Her simile is exact: ‘war-painted like skeletons’. The exoticism of this description conveys the character’s psychology at this point. It contains elements of both wonder and fear (in the comparisons to symbols of conflict and death). This specificity reads as apt for a US missionary’s wife who is newly transplanted to Central Africa. As a whole, the description is compact, showing both general and particular details about the local forest.

8: Would it make sense to involve more of the senses?

When describing, we often focus on the visual because we are building a world with visual referents. Yet the other senses (touch, taste, smell, hearing) are useful too.

When you’ve described a scene, go back and ask if any of the senses are lacking. What is a bakery, for example, without its smell? What smells might a character notice first there? A character who loves food might describe the aromas of this setting with detail and relish. A character who is mostly pragmatic about food, by contrast, might describe the shop owners’ or other patrons’ appearances rather. Think about not only how you can involve the senses, but who is using their senses and which of their senses are most dominant or relevant.

Adverbs (words that ‘give information about a verb, adjective, or other adverb’) can be useful. Some authors see them as lazy and hallmarks of poor style. It’s true that instead of writing ‘she ran very fast’, ‘she sprinted [or bolted/tore/sped]’ is stronger. Strong verbs are simply more descriptive than a bland verb such as ‘to run’ plus an adverb of degree.

Besides finding strong verbs, you can show a character’s inner state and external expression of this state with movement and gesture. Perhaps a cross character points her finger or strikes her thigh in impatience with a clenched fist. Details such as these are often stronger than adverbs. Perhaps the clenched fist character struggles to contain anger appropriately so she directs it inward (hence striking herself in a moment of fury).

List descriptive verbs when you’re writing a scene requiring stronger action. Try different options to see which will be most compelling.

10: What description words have successful authors used to describe similar characters or scenes?

Descriptions by accomplished authors are useful reading when you want to create a specific tone or mood.

For example, if you want to create an eerie or supernatural atmosphere, an author like Edgar Allan Poe or Stephen King will inspire. As you read, whenever you find a description vivid and believable, jot it down in a writing journal. Categorise descriptions (e.g. have sections for ‘character’, ‘setting’, or more specific details such as ‘eyes’ and ‘houses’). This way, when you’re next describing character or settings, you can dip into your description example handbook for inspiration.

Want to improve your character and place descriptions?

Sign up for Now Novel for tools and guides that will help you make the world of your story vivid and intriguing.

Fictional author, blogs and researches family trees. I write about historical families by focusing on the challenges, social issues and indiscretions that caused major disruptions in their lives. My aim is to create realistic reality to the lives our ancestors lived, bringing greater understanding to our generation. Follow The Fortune Seekers novels- Dan and Charlotte and Power and Authority. Books 3 and 4 underway. I also write as Annie Browne. View more posts